About Andrew Clermont and Bands

Andrew Clermont is a chameleon multi-instrumental musician from Bluegrass to Indian, Scandinavian to Oldtime.
Has toured with various essence of Australia & US country music and rubbed shoulders with the cools of jazz and classical.
A 3 time Bluegrass Guitar Champ and a Director of the Golden Fiddle Awards in Australia! 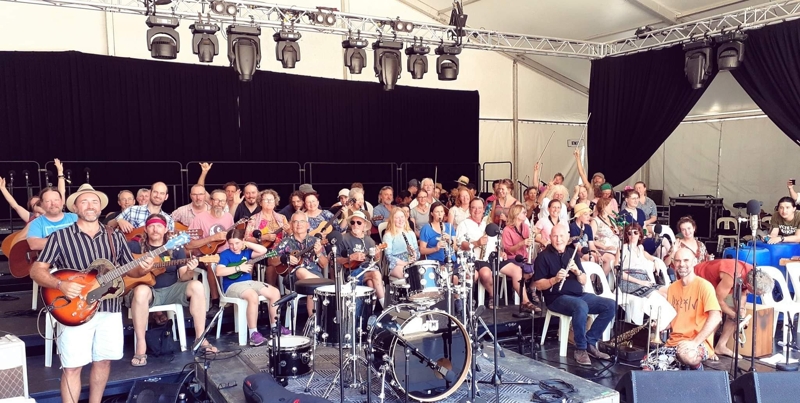 2020 had rocked in with a megalithic finale @ Woodfood (un)Fire Event, QLD
co-ordinating the String Section to the 100 piece Orchestra (see highest fiddle bow at the back !)
Followed by a multitude of Supper Club Shows Nowendoc (free for the locals & firefighters/ drought stricken),
Murrurrundi (Chicken in the Window Barn) & Tamworth Country Music Festival

@ The North Tam Bowlo plus The Golden Fiddle Awards!
(see youtubes! over 150 highlights!!)
Then Yarra Junction Fiddlers Convention, Tour with Goldheist to SA and Sandford Bush Festival!
Via The Blanche Cave, Naracoorte! 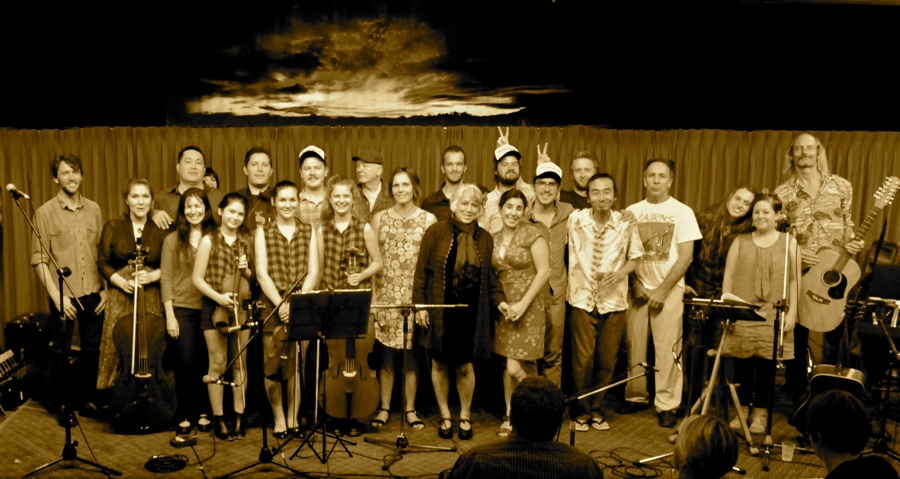 And during it's decades -
featured at Woodford, Tamworth & Fairbridge Festivals plus the National Folk Fest,
Clermont melds peoples musical strengths and inspiration into a "wild wood" with few limits
- in it's 23nd official year in 2021 with 2 Triple Live CD sets plus many DVDs of captures!
See the CD Shop
He finally created an all encompassing event, highly regarded & cherished across many Festivals
- not only originally hosting the NoHoldsBarred Fiddle Contest, it also allowed the creation of most orchestration possibilities
in the name of Country(s) & Folk Music with a fellowship of youth & seasoned who stop at few borders or genres.
Andrew Clermont's International Supper Club included 100 players in 2013!
Sup Club Live Recordings are distilled into - 7 CDs and many DVDs (including Tuition)!

BluGuru
Sounding like "Jeff Beck meets Ravi Shankar on the set of 'Oh! Brother Where Art Thou' while dancing in Rio!", 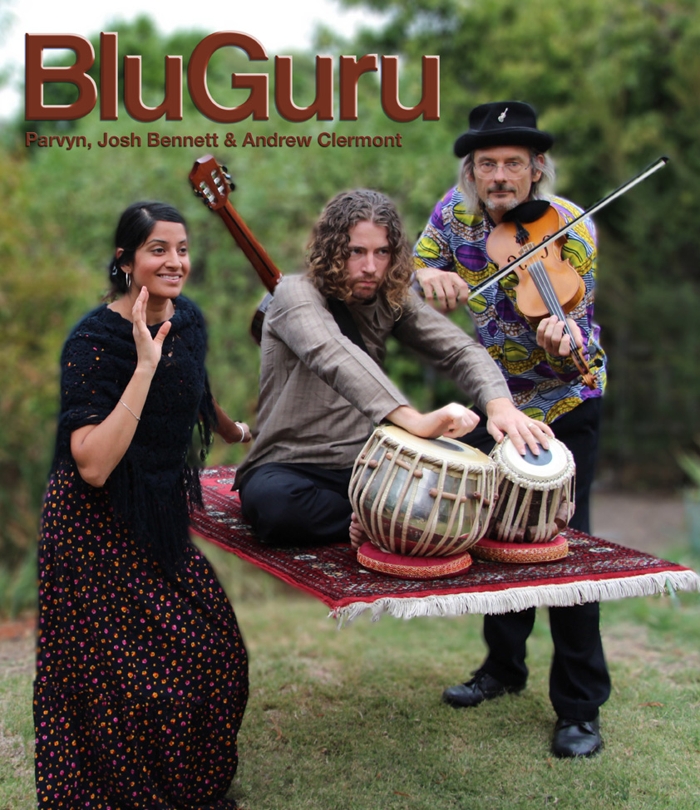 They are distilled from a vibrant world touring history with
a 3 part harmonised twisting tale of gone Bluegrass/Celtic/ Blues/ Swing/ Jazz/ Indian adventure.

BluGuru was born of the Dya Singh world touring - gleaning influences from each festival and act met. It all rubbed off and became distilled into
the trio featuring the sublime voice of Parvyn ( with Percussion, Mandolin & Indian Dance - also seen with Bombay Royale),
Josh Bennett (Guitars & Mandolin to Sitar & Tabla - Adelaide Fringe Award Nominee for Best Music and the ONLY invited
foreigner performer at India's 14 day Saptak Music Festival of Festivals!) - .
And chameleon Andrew Clermont, who is also a nutso Fiddler, Mandolinist & 3 time Bluegrass Guitar Champ to boot -
over 30 years touring -  from Tom T Hall to Totally Gourdgeous!
Plus special guests include cellist Rachel Johnston or Octave Violinist Shenzo Gregorio (Electic Stunt Orchestra & Fourplay)
with big smiles all round. 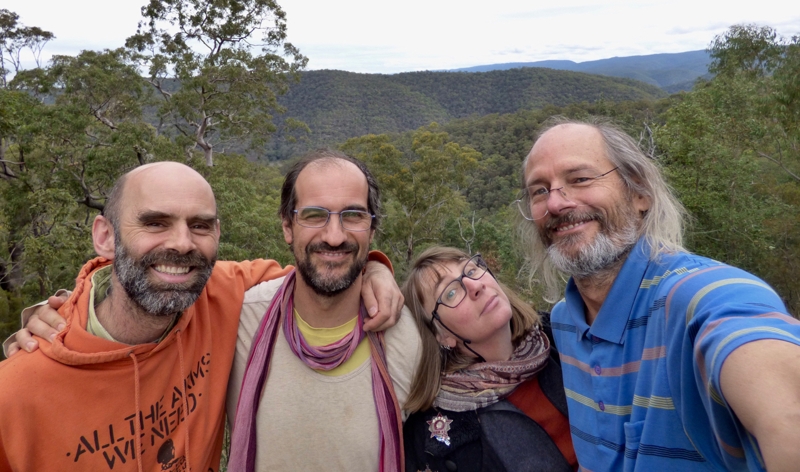 Andrew Clermont touring with super cool cellist Rachel Johnston (formerly 7 years of the Australian String Quartet (!) and toured with
Missy Higgins). Together they covered a selection from the tips of Scandinavia through UK to inner Outback & Oldtime.
Tantalising and soaring are the works. Curious & twisted are the stories and songs. Clermont is with new sensuous double size Mick Moffat F5
Mandola along side the Gilchrist F5 Mandolin and Roger Buckmaster Fiddle, beside Rachel's Luis & Clark "near glowing" Cello,
plus Clermont's 3 time Bluegrass Guitar Champ maneuvers and haunting "cast metal" Didgeridoo.
A feast to behold.
Occasionally touring/ appearing with Mal Webb on unique Mouth Music Beat Boxing

Andrew Clermont - Teacher
Gleaning from near 30 years of Festival Workshops/ Schools/ Private & Group lessons, Clermont has specialised in a bridge for the people who
learnt violin at some time, likely classically trained but are perhaps stuck at a progress plateau. Clermont can come to you or you to him or even
take a DVD path. This Crash Course to Fiddle gets your bowing rhythms & lilts up & running for the multitude of fun Bluegrass/Celtic/ Swing
tunes, plus lowdown Fiddlin` Blues & Country. A simple introduction to modes of scales, reactive and interactive playing, going ballistic and easy
improvisational possibilities (also available for Mandolin, Guitar or Didgeridoo).

A further overview of workshops
As Clermont applies the workshop hinged on the actual attendees needs, the following is just a guide.
The aim is to get you beyond where you are, in the time available.

Specific tuition in : -
Separate CRASH COURSES TO MANDOLIN/ FIDDLE/ GUITAR all include the following:
How to make what you play, sound like it was always meant to be there. Slotting into someone else's genre/style, recognising and adopting
their idioms and producing the appropriate accompaniment. Rising above and around your Musical Plateau;

SOLOING FOR FIDDLE AND MANDOLIN - from Blues to Happy Days.

A simple introduction to modes of scales; reactive and interactive playing;
going ballistic; Improvisation is but a few notes from where you are now!

Pick techniques , achievable Chords, Accompanying, Soloing and a bit on how to go
ballistic, musically :-) Includes a leaning to the blues


2. A CRASH COURSE TO FIDDLIN' - DVD support
Bowing - in particular the shuffles, lilts, trills and a step by step path to soloing safely and effectively.
Includes a leaning to the blues and definitely an easy conversion from Classical to Folk fiddling.


3. A CRASH COURSE TO FLAT-PICK BLUEGRASS/ FOLK GUITAR - DVD support
Includes applying Guitar to Fiddle tunes and the most volume you can extract from your instrument per effort.
Rising above and around your Musical Plateau; useful accompaniment and a bit on how to nuts in performance !

5. Demystifying SOUND MIXING/ BAND ENGINEERING -
focused on live mixing: equalising the whole sound system (and the band players!!) : extracting the Real tones from the instruments and voice,
pre-amps, pick-ups & microphones: stacking the odds and players in your favour for a successful mix & performance - and most importantly -
keeping it simple!

6. A Song-writing Workshop - having songs sound natural and a few other things you may not have checked on!

and the last 10 years of Mildura Country MusicFest !

Clermont has finally "settled down", Solo or nestled in a happy handful of bands with 5 or 6 instruments. They appeared in Austria/ Kenya/
USA/ Canada/UK/ Germany/ Taiwan/ Malaysia/ Hong Kong/ Singapore/New Zealand/ and Australia wide through the last decades!
For over 20 years now he's been 'pumpkin powered' in Totally Gourdgeous (Voted Best Live Folk Band '08);

Andrew initiated the NoHoldsBarred Fiddle Contest and is a Director to the Golden Fiddle Awards.
These are both sponsored by Epoch Violins with Andrew touring the unique 5-string models while also sponsored/ assisted by
Maton Guitars, Gilchrist Mandolins and White Swallow Banjos plus now Clearview IT and Better Care Central NSW.
There are up to 30 CDs & assorted Tuition DVDs (Fiddle/Mandolin/Guitar/Didgeridoo) with a recent addition of the
"Being There" Big Pics multi-photo series prints. These pics can blow up to vertical door size & house wall widths & dimensions
though typically the A3 size is bought.
All in all a true smorgasbord of sound and vision

The years since 1998 have seen Andrew Clermont’s International Supper Club grow to full swing with artists from Tibet, Italy & Nepal to
Texas, Oklahoma & Taiwan and many of Australia’s own unique Voice to Dance & Instrumentalists presented. Andrew is delighted to
have this ‘Fringe Festival’ (often 15 shows!) develop in his home town - via the Tamworth Country Music Festival primarily, but also
gathered at Woodford Folk Festival for many years, National Folk, Pt Fairy, Fairbridge Festivals and way up to Tallin in Estonia and even Berlin!

Born in Adelaide in 61 and soon a ‘legend’ at his Primary School concerts, Andrew has now resided near Tamworth for most of his life;
trained horses to ride off into the sunset on and taught/ mentored a string of adventurous musicians across the country
through workshops, visits & lessons both direct & on Video.

His love of acoustic music gained him 3 Bluegrass Guitar Championships (now a judge) and a Golden Guitar with the Three Chord Wonders
at the beginning of his working life. Then there was the Noses of Fame & Hands of Fame (Tamworth & Barmera) inclusions in cement!
There is a bold bunch of beautiful daughters & grandsons plus family from Adelaide through Tamworth to Berlin, Germany.
Funnily enough it’s the regular touring that keeps a large element of family contact rolling along.

He is a tall, colourful and exuberant regular at many festivals - even providing sound production to suit some of them. The only
Artist to Fairbridge Folk Fest to be invited to all four showcases of Mandolin, Fiddle, Guitar & Gospel + Musicianship Award winner
at Frances Folk Gathering + a regular host of Fiddle Round Robins around the country.

somewhere near you soon!

There are some 30 or more CDs which present Andrew in the various groups, Solo and with various collaborations. Most can be
sampled at the extensive www.andrewclermont.com.au website with many travel stories, photos world wide, and Concert Emovies
to download. Also waiting there are samples of the 4 Tuition Videos, and an entire ‘House’ of photos & linked pages to glean a more
personal insight to the last decades of world traveled music from the chameleon, Andrew Clermont.

Maton Guitars, Gilchrist Mandolins and Epoch Violins with close relations to
Tucker Barrett Instruments, White Swallow Banjos and Swales Gourd instruments -
plus now a hand from Clearview IT and Better Care Central NSW for performer travel fr The Supper Club.
Andrew now has several festivals for which he provides & runs the sound production as well.

Other occasional collaborations through the years -

Yarra Junction Fiddlers Convention (for most of 35 years)
Woodford (30 years!), National & Pt Fairy Folk Festivals, Frances Folk Gathering (all of them!)
Mildura Country Music Festival (production & Awards player during the last decade)
The Supper Club (22nd year in 2020) a 'Fringe Fest' to Tamworth CM Festival
(been going to it since 1983)